Coronavirus is causing a flurry of plastic waste. Campaigners fear it may be permanent 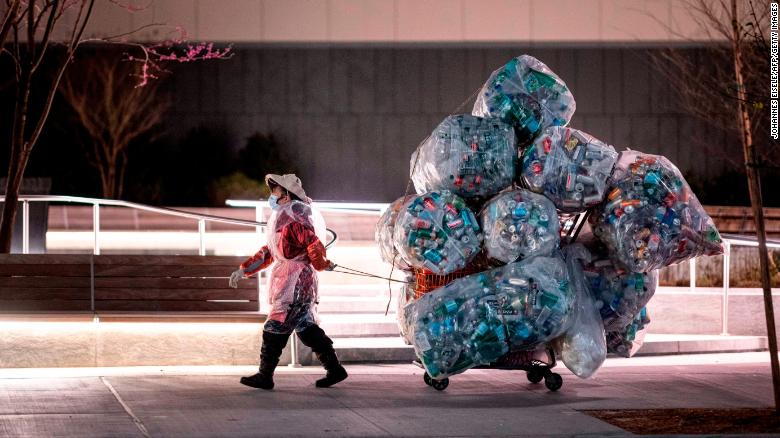 A woman wearing a face mask and a plastic bag pulls a cart loaded with bags of recyclables through the streets of Lower Manhattan in April.

London (CNN)All of the defining images of the coronavirus pandemic seem to feature one thing: plastic.

Surgical masks, gloves, protective equipment, body bags -- the Covid-19 crisis has spurred a rapid expansion in the production of desperately-needed plastic products, with governments racing to boost their stockpiles and regular citizens clamoring for their share of supplies

Such production is necessary. But all that plastic ends up somewhere -- and environmental campaigners fear it is just the tip of a looming iceberg, with the pandemic causing a number of serious challenges to their efforts to reduce plastic pollution.
From people discarding plastic gloves and masks in cities across the world to important regulations on the use of plastic being scrapped, rolled back or delayed, the problem has taken a back seat during one of the most significant public health crises of modern times.
The implications of those trends could spell years of trouble for our already polluted oceans.
"We know that plastic pollution is a global problem -- it existed before the pandemic," Nick Mallos of US-based NGO Ocean Conservancy tells CNN. "(But) we've seen a lot of industry efforts to roll back some of the great progress that's been made.
"We need to be quite cautious about where we go, post-pandemic," Mallos adds.

The coronavirus crisis has sparked a personal protective equipment (PPE) arms race around the world as governments rush to stockpile masks, gloves, visors and gowns. The battle has proven so intense that some have resorted to international mudslinging.
It comes as a growing number of countries encourage or order their citizens to wear face coverings in public -- once seen as a personal preference with minimal benefit, but now the preferred guidance in the US and much of Europe.
And while the moves are important from a public health perspective, one immediate impact is clear on streets around the world.
"Right outside my house there are discarded gloves and masks all over the neighborhood," says John Hocevar, oceans campaign director at Greenpeace USA. 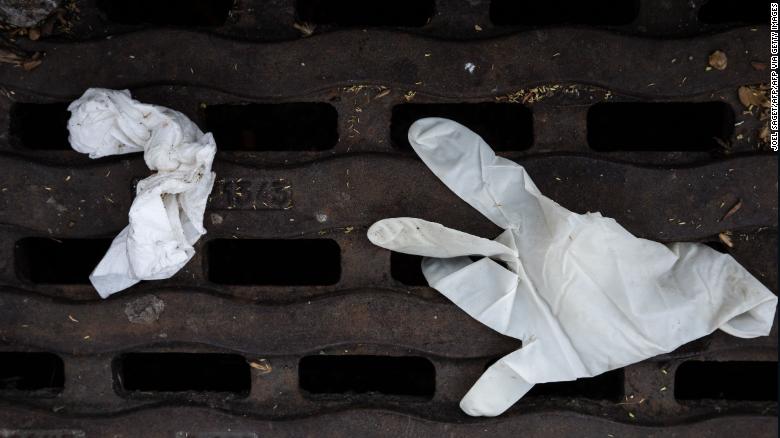 Discarded masks and gloves have become a common sight in cities around the world.
"It's been raining here for two days, so these are very quickly washed down into the sewer. Here in Washington DC, they end up in the Anacostia River, out in the Chesapeake Bay, and then the Atlantic Ocean."
PPE has become an additional threat to the world's oceans, which have been choking under the weight of plastic at a rapidly increasing rate.
Global plastic production has quadrupled over the past four decades, a 2019 study found, with its authors warning that if that trend continues, the making of plastics will make up 15% of greenhouse gas emissions by 2050. By comparison, all of the world's forms of transportation now account for 15% of emissions.

Other studies have estimated that some 8 million tons of plastic trash leak into the ocean annually, with the rate getting worse every year.
But PPE presents very unique problems. "The structure of PPE will make it particularly hazardous for marine life," says Hocevar. "Gloves, like plastic bags, can appear to be jellyfish or other types of foods for sea turtles, for example. The straps on masks can present entangling hazards."

Over time, those products break down and add to the vast collections of microplastics in our seas, air and food. And the irony is that, while we produce and discard plastic to fight one public health crisis, we may be slowly contributing to another. 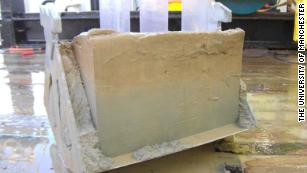 Highest ever concentration of microplastics found on sea floor
The risks of microplastics to human health are still being studied. One stems from the fact that microplastics passing through wastewater plants can pick up harmful bacteria, which they can carry with them. If we ingest the plastics, we may ingest the bacteria.

Another is that plastics have a number of chemicals added at the manufacturing stage, and it's possible that these are released in the body.
"First and foremost, this is a time of public health and safety being the main priority," says Mallos. "But we also have to realize that the broader waste issue that is being highlighted by this pandemic really matters."
"We know many places around the world don't have this capacity to manage this waste," he adds. "This is harmful to human health, and to the oceans and the environment."

There's little that can be done, given the timespan of this crisis, to reduce the amount of plastic involved in countering coronavirus. But campaigners hope changes will come.
"We are seeing some people experimenting with disinfecting PPE now, but that's largely out of necessity -- we just don't have enough," says Hocevar.
"Longer term, we'll want to be a little bit more intentional about that, and develop reusable, disinfectable PPE."

While PPE production causes a plastics problem visible in the streets and gutters of nearly every major city, another is playing out more quietly.
A number of restrictions on single-use plastics have been paused or rolled back as authorities scramble to fight the crisis.
In the UK, a much heralded charge on plastic bags has been suspended. A ban on such items has been put on hold in US states such as Maine, while retailers including Starbucks have banned reusable products to protect against the spread of Covid-19.
The pattern has prompted concern from organizations including the World Bank. "These measures have all been announced as temporary, but how long will they stick, fed by anxiety around health concerns?" Grzegorz Peszko, a lead economist at the organization, asked in a blog post last month.
"As Covid-19 hits, it seems to be shifting the tide toward single-use plastics," Peszko concluded.
Driving that concern is a feeling among conservationists that the plastics industry is seizing its moment to capitalize on public health concerns by promoting the use of its products. 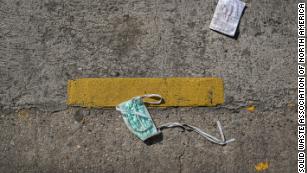 Discarded masks and gloves are becoming a health hazard as people dump them on streets
"Parts of the plastic industry have worked really hard to exploit fears around Covid," Hocevar says.
"It's disappointing that lobbying groups are taking advantage of this climate of fear and uncertainty," Mallos adds. "Using this opportunity to sell disposable plastics as the safe option is one of our challenges."
In March, the Plastics Industry Association wrote to the US Department of Health, asking it to "make a public statement on the health and safety benefits seen in single-use plastics."
The pandemic is "forcing many Americans, businesses and government officials to realize that single-use plastics are often the safest choice," the group said.
Conservation groups criticized studies cited by the body, and have talked up others which suggest that Covid-19 lives for longer on plastic than on most other surfaces. CNN has contacted the Plastics Industry Association for comment.
Hocevar remains confident that rollbacks will be temporary, and notes that some progress in his organization's cause has been made even during the pandemic -- citing new restrictions against single-use plastic in Orange County unveiled in April.
But Mallos fears the daily onslaught of coronavirus developments means important setbacks are going under the radar.
"We are oversaturated daily with news around the pandemic ... there is so much information streaming to us daily that many of these types of messages can be missed," he says. "It may not seem like a significant action at the moment, but it will manifest in very dangerous ways down the road."
Source:  https://edition.cnn.com/2020/05/04/world/coronavirus-plastic-waste-pollution-intl/index.html
Cnn, Corona, Covid-19, Plastic comeback, Plastic pollution