‘No-waste’ Japanese village is a peek into carbon-neutral future 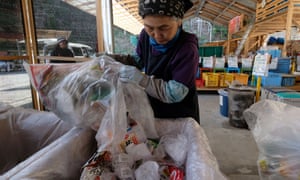 Household waste in Kamikatsu must be sorted into no fewer than 45 categories. Photograph: Kazuhiro Nogi/AFP via Getty Images

The residents of a remote village on the Japanese island of Shikoku have spent almost two decades reusing, recycling and reducing, united behind a mission to end their dependence on incinerators and landfill as the world struggles to tackle the climate emergency and the plastic waste crisis.

Although Kamikatsu, an hour’s drive from the nearest city, Tokushima, and 370 miles from Tokyo, has not managed to banish waste altogether, its heroic efforts have inspired other communities in Japan and further afield to take up the zero-waste challenge.

Household waste must be separated into no fewer than 45 categories, before being taken to a collection centre where volunteers ensure items go into the correct bin, occasionally issuing polite reminders to anyone who forgets to take the lid and label off a plastic bottle or remove nails from a plank of wood.

Items still in good condition end up at the Kuru Kuru recycling store, where residents can drop off or take home merchandise – mostly clothes, crockery and ornaments – free of charge.

Not even the coronavirus pandemic has hampered the community’s effort to bring waste generation down to nought (there are no orders to self-isolate in that part of Japan) but it was a quest with rather difficult beginnings.

In 2000, the village was forced to change the way it managed its waste when a strict new law on dioxin emissions forced it to shut down its two small incinerators.

The ageing, shrinking community did not have the money to build new incinerators or transport its waste to out-of-town facilities. The only option was to create less rubbish and to recycle as many items as possible.

Three years later, Kamikatsu became the first place in Japan to pass a zero waste declaration – a statement of intent that met with initial opposition but which in the years since has created an unlikely community of ecowarriors.

There were complaints that the regular cycle of sorting, washing and disposing of rubbish would prove too much for the village’s 1,500 residents, who found themselves having to sort rubbish into myriad types, to compost food waste and to wash plastic bags and bottles so they could be recycled.

“You are always going to get people who are uncooperative in any community-level project,” said Akira Sakano, the head of Kamikatsu’s nonprofit Zero Waste Academy, formed in 2005.

Instead, she added, the academy focused its energies on the 80% of residents who supported the venture and who would, in time, persuade sceptics to follow suit.

She said the village had struggled to find a way to recycle certain items that didn’t fit into its waste categories, because manufacturers continued to use non-recyclable materials that inevitably found their way into Kamikatsu households.

“Our goal was to achieve zero waste by 2020, but we have encountered obstacles that involve stakeholders and regulations outside of our scope,” said Sakano . “And certain products are designed for single use, such as sanitary products, which are difficult to segregate because of the nature of the waste product.”

While reducing consumption has proved difficult, most villagers have embraced the recycling regime. As a result, the village has been able to keep the vast majority of its waste out of incinerators and landfill.

Products that contain parts that fit into two or more categories have to be taken apart and their components placed in the correct bin. Milk cartons, cans, and even plastic food wrappers and shopping bags must be washed before being thrown out, and newspapers placed in neat bundles, secured with twine made from recycled milk cartons.

Glass bottles are relieved of their caps and sorted by colour. Plastic bottles that once contained soy sauce or cooking oil are kept in a separate bin space with PET bottles used for drinks.

In fiscal 2016, Kamikatsu recycled 81% of the waste it produced, compared to a national average of just 20%. The small number of items that have proved impossible to recycle, including leather shoes, nappies and other sanitary products, are sent to an incinerator outside the village.

And it began addressing the growing problem of plastic, which makes up the majority of the residents’ waste, well before the rest of the country.

Japan is the world’s second-biggest producer of plastic waste per capita after the US. Its consumers get through about 30bn plastic shopping bags a year, and it once shipped 1.5m tonnes of plastic waste to China every year until Beijing banned the imports in 2017.

As word of its campaign spread, the village has hosted officials and campaigners from overseas and other parts of Japan hoping to emulate the scheme in their own communities.

Not all residents are convinced that the project can be easily replicated elsewhere, however. “It works because we’re only 1,500 people here,” said Naoko Yokoyama, who moved to Kamikatsu from Kyoto about two years ago.

“It would be difficult in a big town with a larger population,” because authorities would struggle to enforce it, Yokoyama told Agence France-Presse as the zero-waste deadline approached last year.

To give the village a fighting chance of reaching its target at a later date, residents are encouraged not to buy or use products that may end up as waste, through a scheme that rewards them with points whenever they refuse single-use plastics. The points can then be used to buy other items.

Sakano said the future of the zero-waste project would depend on businesses and local governments collaborating to make it easier for households to recycle, but added that individuals still had a duty to reuse and reduce. “As you can imagine, it’s a lot easier to simply refuse plastic bags than to have to build somewhere to recycle them.”